***Sorry for the delay between posts. March Madness started and I have been locked in. Korean basic cable does not provide coverage, so I have had to watch on my computer.

I have a friend who recently told me that I was taking too long to get into the substance of my posts. “Millennials can’t maintain attention for long periods of time. Get to the hook quicker. Also, I’m a medical doctor, respect my input.”

Sorry, M*tt. Congrats on Harvard, here is the hook:

Korea has been great. I’ve walked through the city (Daegu) and I’ve visited their shops. I’ve complimented their women and been threatened by their husbands. I’ve tried their food and I’ve drank their beer. I’ve mastered the transit system and I’ve haggled cab drivers. I’ve learned to read Hangul, which is impressive and I’ve DM’ed American beef using Korean alphabet. But, and here comes the hook, I’ve yet to experience the profound; that transcendent event or sight that validates why it is exactly I am abroad and away from home…

Donghwasa Temple turned out to be that transcendent experience.

It was beautiful as it was sacred and it was friendly like it was stoic. I’m coming in hot with the emotive analogies, I know. They’re necessary. This was an amazing experience and something I won’t forget.

To appease both my MD friend and the distracted viewership, below are some pictures of the temple, followed by personal descriptive significance. I will make solemn observations and I will force jokes. When I get nervous or am discussing something that has actual meaning to me, like women and temples, I make jokes.

This experience had real meaning for me. You will see why.

A view of the Tongil-daejon Hall. I’m standing in the shadow of a large, majestic Buddha statue– I’ll show that next. The brown floor surface is an area, facing the statue, where all are welcome to kneel and pray. Extra mats are available as well as candles. Amongst a large group of people, the feeling of calm and peace is palpable. I stood on the edge and made a reverent bow. My flexibility is laughable and, even though I’m sure I would not be judged at a place like this, everyone else who prayed looked like their limbs were made of jello. I was afraid to be the big American making big movements disturbing little people. I paid my respects standing, still moved by the sanctity of this expanse.

The Tongil-daebu Buddha Statue. I’m going to list of some facts straight from the temple tourist handout: The statue was completed in 1992, is 33 meters high and 16.5 meters round, making it the largest Buddha statue in the world. There are two pieces of Buddha’s bones inside the statue. Buddhist wishes desiring the reunification of Korea are gathered here.

A unique and delicately powerful feeling overwhelms as you approach and circumnavigate this statue. I was lucky enough to gaze upon it as the sun was setting. There have been few moments in my life as special as this, December 26, 2006, in the front seat of my Subaru being the other that comes to mind. This statue incites emotions of goodness and selflessness. It is hard to explain, but in the vicinity of this Buddha, you feel connected to a lot of things, especially people.

***The statue is not miming the shocker technique. I felt terrible for thinking it, but the form is similar. 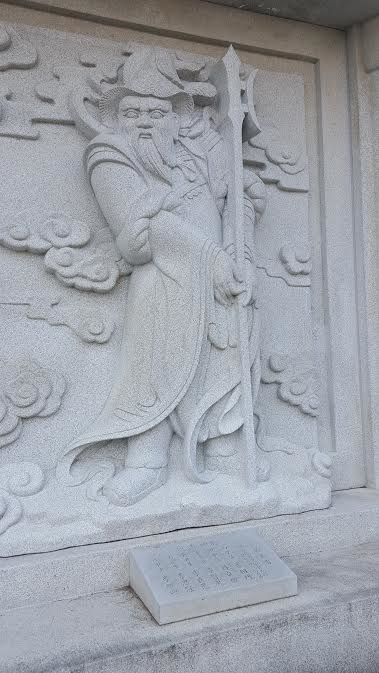 This is the sign of the snake, per friend and translator Alex Yoon. It is representative of those born in 1989, among other things. I am thinking of making this my first tattoo, probably on my back or bicep. I will not get the tattoo until my mom has filed my taxes. She still does things like that for me, and I know she will sabotage my return if she finds out about any Asian ink.

The Bongseoru Pavillion. Amazing design predicated by the Phoenix. Stone eggs are spread across the square; eggs of the phoenix. I didn’t take any pictures of said eggs. Sorry. They were intricately designed. I wish you could have seen them. Paper lights, pictured above, are strung all throughtout the grounds. We weren’t able to stay to see them illuminated during the night, but even in daylight they provide a visually calming ambiance.

Also, the girls in the picture are in high school–I asked. 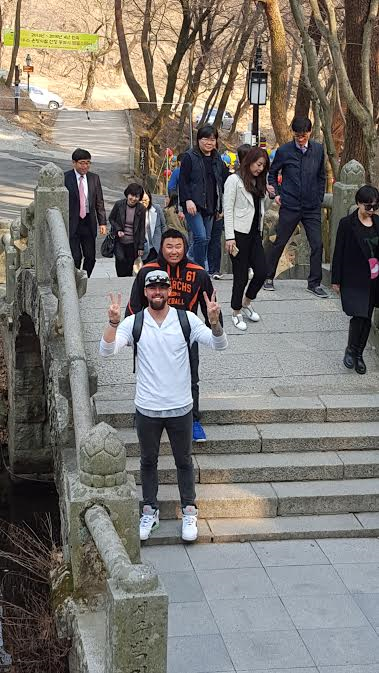 Here our friend and translator is completely disregarding the sanctity of temple grounds performing a photo bomb. Photo bombs are not a formal practice of Seon Meditation–I asked.

Several stone bridges, like the one shown here, are spread out along a creek that sprawls the landscape. Beautiful.

I can read this sign, if you were curious.

The temple squad. We were worried about being “those” tourist that take too many pictures and miss what is actually in front of them. Koreans though, as the stereotype holds true, take aggressive amounts of pictures–even in Korea. This was one of those opportunities we couldn’t pass up. Truly a special place.

I would encourage making a trip like this for a multitude of reasons; I could name several. But there is something that stuck with me, something that really resonated. It is especially pertinent today, I feel.

I left knowing that religious preference or affiliation doesn’t matter. That was strange to me, as I just visited a Buddhist Temple. But that’s how I felt. I don’t want to preach, because that’s not who I am and it doesn’t play with IG girls, I just feel that in times where religious/racial persecution affect millions, experiencing what I did can bring resolve and clarity.

Closing hook, for M*tt: Dogma has no place in a faith based upon principles where love and universal connectedness are paramount. No deity is above another, so resentment can’t exist. I am not Buddhist and that doesn’t matter. At this place, amongst all these different people, what was common was the wistful desire for all to be happy. The divine lies within us all, and that should always be what religion is about. I’ve never felt that more than at the Donghwasa Temple, with my friends.

(That SHOULD play with IG girls, btw.)